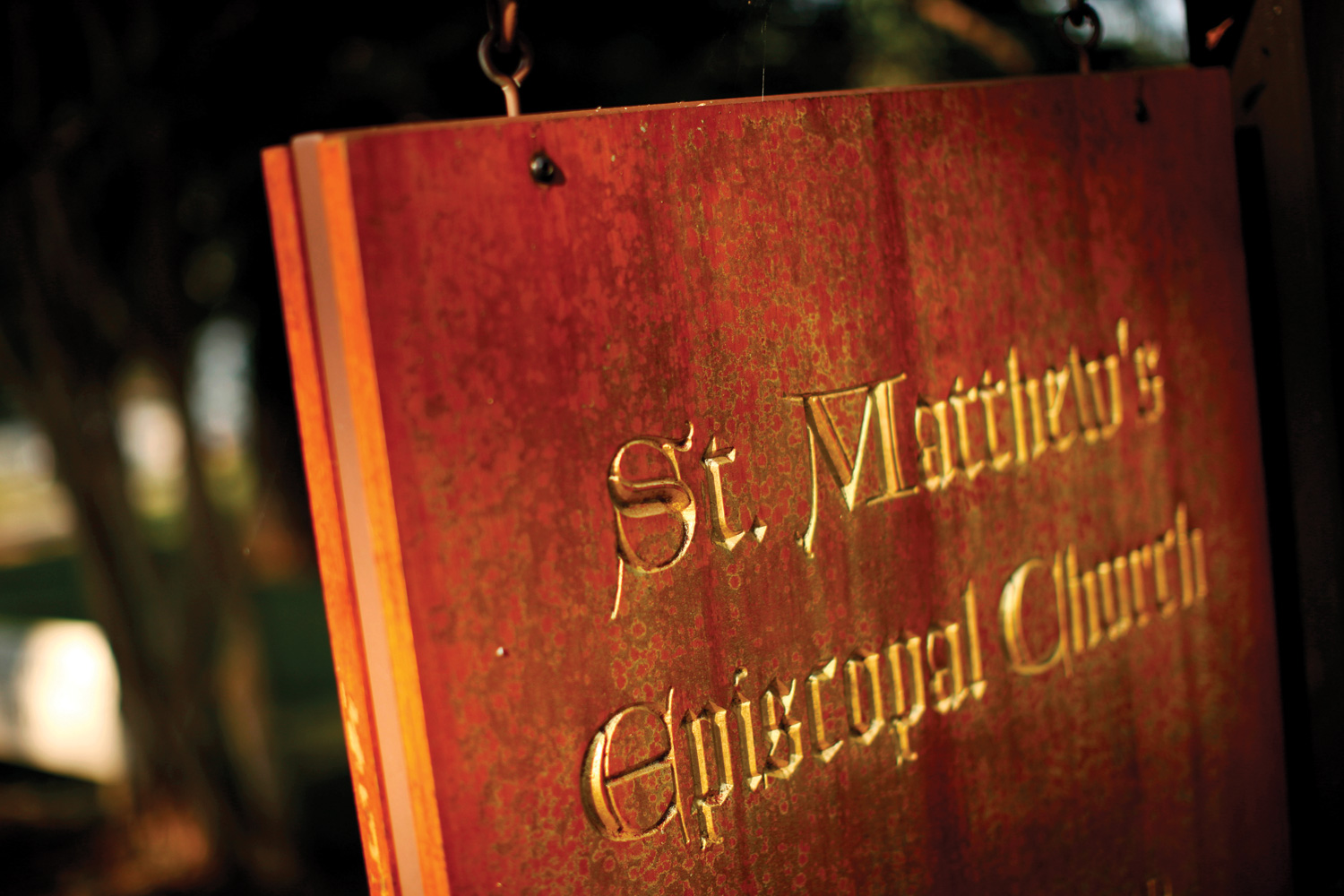 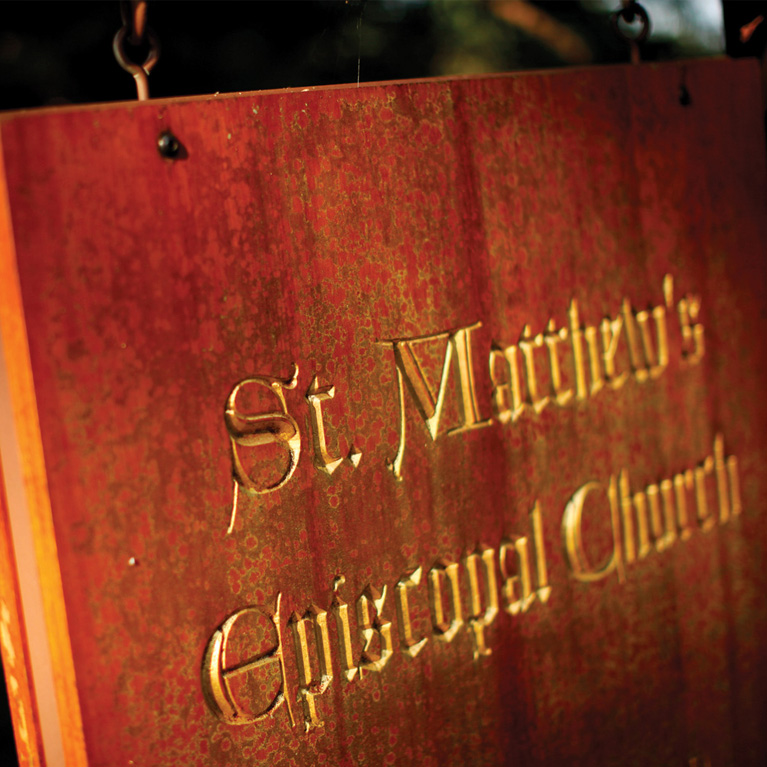 Update Required To play the media you will need to either update your browser or update your Flash plugin.
listen to Brooks Graebner read his prayer
scroll to explore 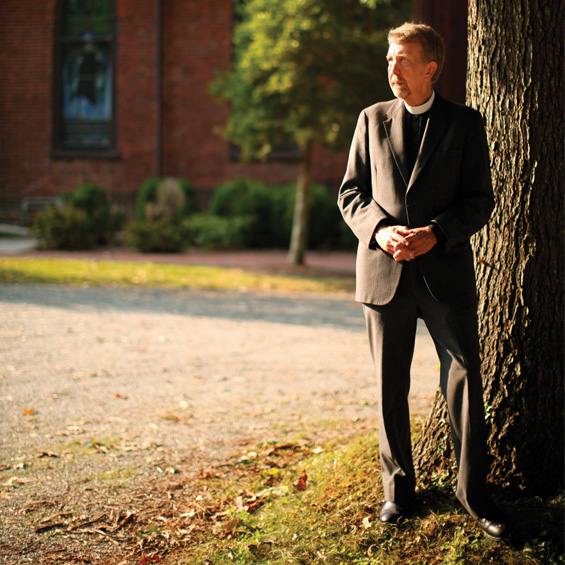 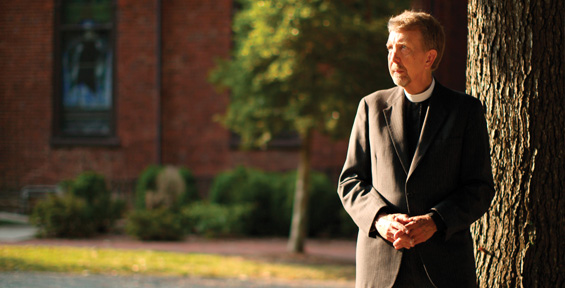 I make my home in Hillsborough, where I serve a parish that dates to 1752, and where we worship in a building that dates to 1825. Like many churches in the South constructed before the Civil War, St. Matthew’s Episcopal Church has a balcony that used to function as a slave gallery. It was intended to draw a line in the building between white folk and black folk and to say to African-Americans, “You may come this far — but no farther.”

Segregation, spatial and spiritual, was also a contested issue in the earliest days of Christianity. In Paul’s letter to the Ephesians, for example, we read that Jew and Gentile are to be built into one holy temple, a spiritual dwelling with equal access for all. But elsewhere in the New Testament, we see evidence of disputes about preserving distinctions between the two groups.

And, of course, something similar happened with respect to race in places like Hillsborough, where there were slave galleries. Even after slavery was abolished, racial distinctions and attitudes of segregation were retained, and instead of a unified church, separate black congregations and black denominations were created, leaving us with new barriers to overcome.

But hopes for racial reconciliation were never extinguished, and a remarkable witness to the power of that vision of peace and unity took place in early 1977, when a 66-year-old black woman was invited for the first time to preach and celebrate at the altar of the old 1848 Chapel of the Cross in Chapel Hill.

This was not just any black woman. This was the granddaughter of a woman once consigned to the slave gallery in that very church. And now, here she was at the altar, having become, just a few weeks before, the very first black, female priest in the Episcopal Church.

By 1977, the Rev. Dr. Pauli Murray had already compiled an impressive list of achievements: as a civil rights attorney, as a cofounder of the National Organization for Women, as a professor at Brandeis University in Massachusetts, and as a published writer and poet. Raised in Durham, this was a homecoming for her, a chance to write a new spiritual chapter in her life. Thirty-five years later, that same chapter was celebrated anew throughout the Episcopal Church, as Pauli Murray was officially added to the calendar of the saints. In honoring Pauli Murray’s life and witness this way, the Church wasn’t saying she was more virtuous or pious than anyone else, but rather that she exemplified and illumined for us what it means to follow the light of Christ and to practice a ministry of healing divisions and overcoming barriers.

Barriers erected over centuries don’t come down easily or instantly. Pauli Murray herself said as much in the sermon she preached in Chapel Hill:

It was my destiny to be the descendant of slave owners as well as slaves, to be of mixed ancestry, to be biologically and psychologically integrated in a world where the separation of the races was upheld by the Supreme Court of the United States as the fundamental law of our Southland. My entire life’s quest has been for spiritual integration, and this quest has led me ultimately to Christ, in whom there is no East or West, no North or South, no Black or White, no Red or Yellow, no Jew or Gentile, no Islam or Buddhist, no Baptist, Methodist, Episcopalian, or Roman Catholic, no Male or Female. … There is only Christ, the Spirit of Love and reconciliation, the healer of deep psychic wounds, drawing us all closer to that goal of perfection that links us to God our Creator and to eternity.

Nowadays the balcony of St. Matthew’s is a place where teenagers like to congregate, away from the watchful eyes of their parents. Sometimes I go and sit there myself, thinking of Pauli Murray. The view from the balcony is an ever-present reminder of how far we have come — and of how far we yet must go. 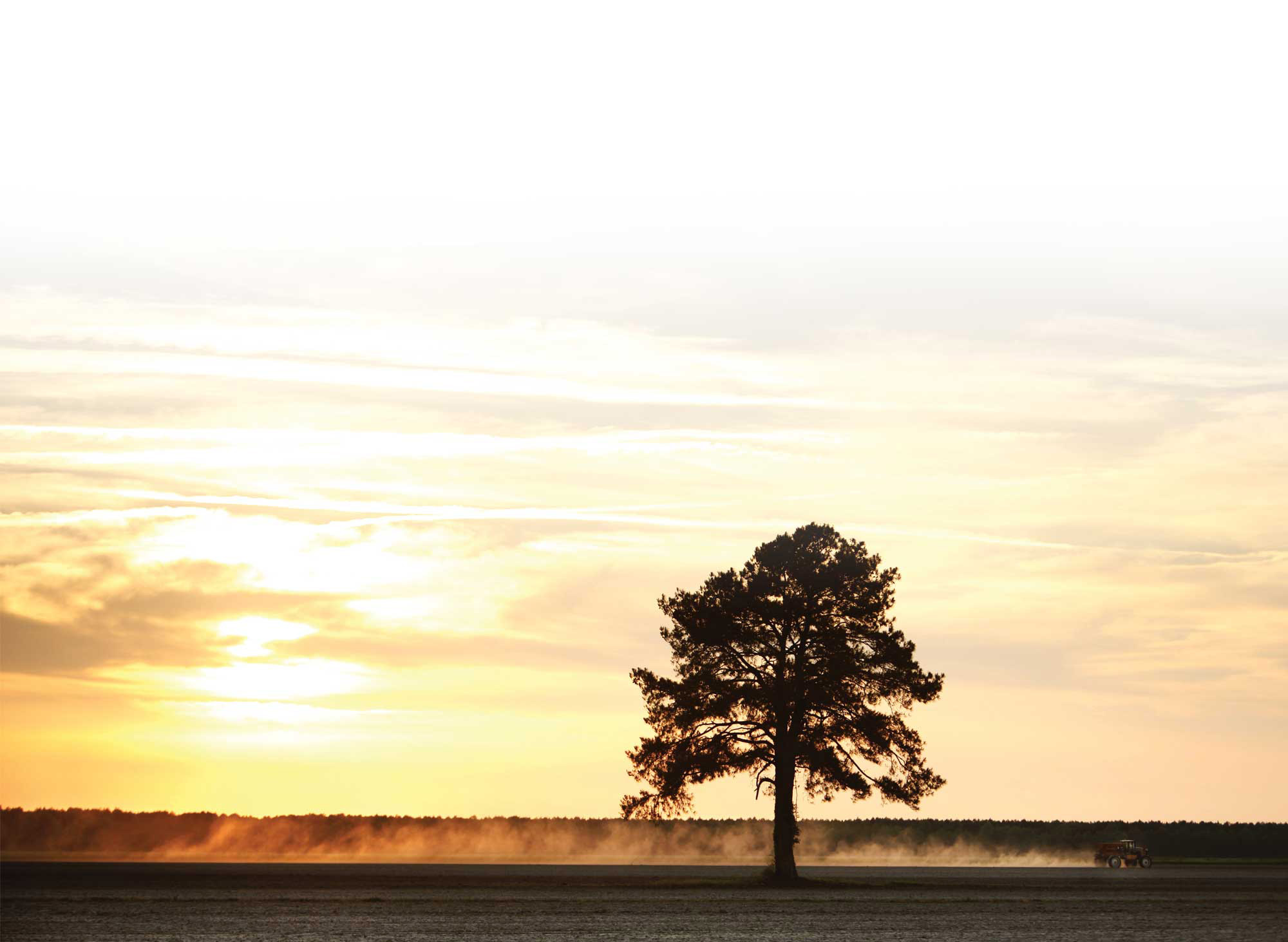 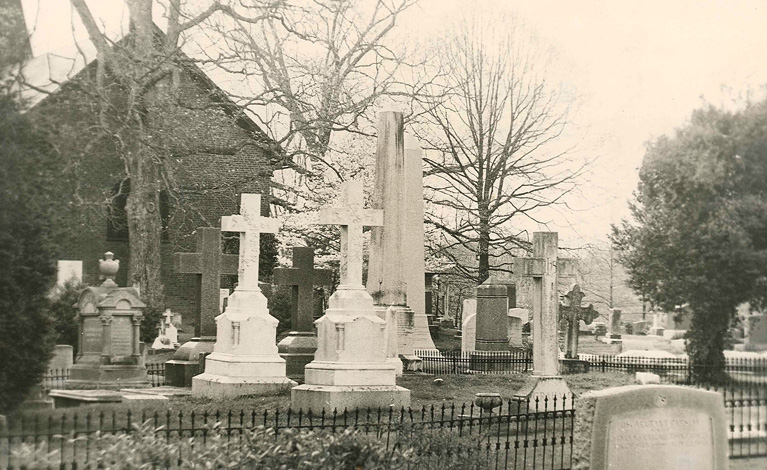 St. Matthew’s Episcopal Church is located on the highest point of property once owned by Thomas Ruffin, who was the Chief Justice of the North Carolina Supreme Court from 1833 to 1852 and again from 1858 to 1859. Photo credit: St. Matthew's Episcopal Church 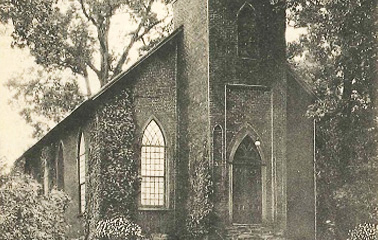 St. Matthew's Episcopal Church was built in 1825. The steeple and tower were not part of the original design and were later added. The bell rang for the first time on Easter Sunday 1878. Photo credit: St. Matthew's Episcopal Church
“Union in Heaven” by Polecat Creek
Update Required To play the media you will need to either update your browser or update your Flash plugin. 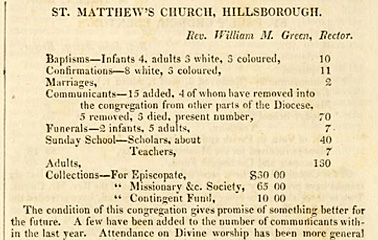 Additions to the church, including the gallery, are described in an 1835 Journal of Proceedings from St. Matthew’s. Photo credit: St. Matthew's Episcopal Church

Possibly the oldest Gothic Revival church building still standing in North Carolina, history is all around at St. Matthew’s Episcopal Church. The building, completed in 1826, houses the “Angel Window,” made of Tiffany glass, and the churchyard contains monuments to many notable figures in our state’s history. Learn more about the church at their website.

True Community is based upon equality, mutuality, and reciprocity. It affirms the richness of individual diversity as well as the common human ties that bind us together. — Pauli Murray 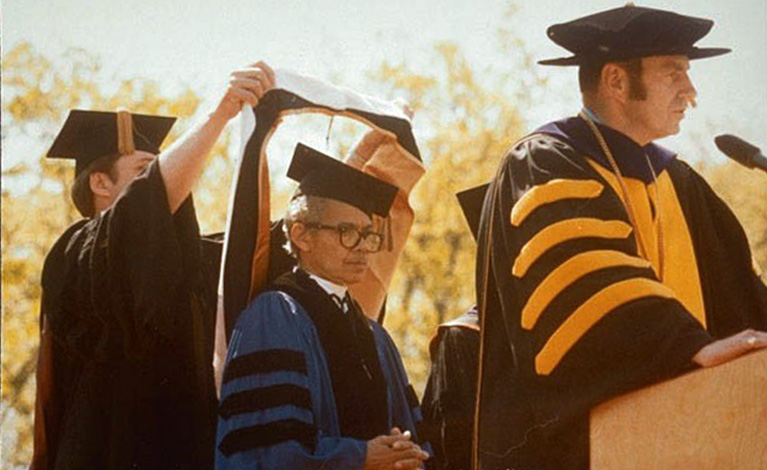 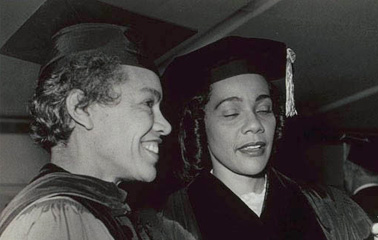 Murray taught at Brandeis University from 1968 until 1973. Here, she is pictured with Coretta Scott King at Brandeis commencement in 1969. Photo credit: The Schlesinger Library, Radcliff Institute, Harvard University 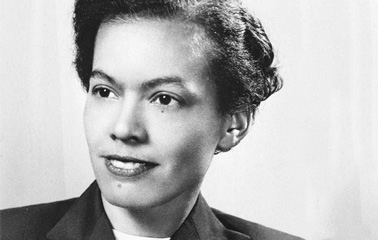 Pauli Murray was a champion for civil and human rights who was raised in Durham. As a historian, attorney, poet, activist, teacher, and Episcopal priest, she worked throughout her life to address injustice, to give voice to the unheard, to educate, and to promote reconciliation between races and economic classes.

She was the first African-American to be ordained an Episcopal priest. Following that ordination in 1977, the first Eucharist Murray offered was at the Chapel Hill church were her enslaved grandmother was baptized.

Her memoir, Proud Shoes: The Story of an American Family, was published in 1956. The book chronicles her roots and paints a portrait of Durham during its formative years.

— Courtesy of the Pauli Murray Project

Barriers erected over centuries don't come down easily or quickly. 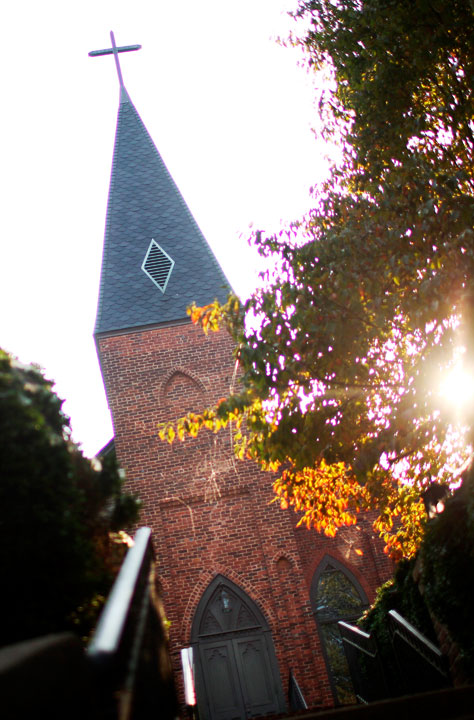 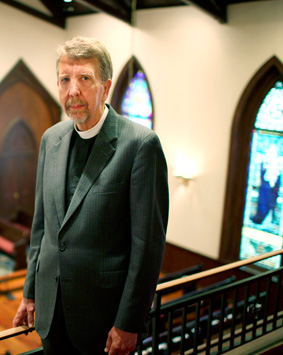 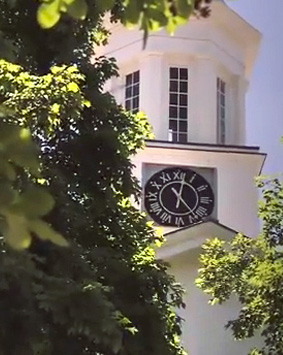 Explore the history and culture of Hillsborough

Watch a segment from “Our State” the television program.

The Rev. Dr. Brooks Graebner is the rector of St. Matthew’s Episcopal Church in Hillsborough, where he has served since 1990.

Graebner originally came to North Carolina to attend Duke Divinity School. He graduated with a Master of Divinity degree in 1976. He later earned a Ph.D. in American religious history at Duke University.

He serves as the historiographer of the Episcopal Diocese of North Carolina, and is a board member of the Durham-based Pauli Murray Center for History and Social Justice, which is devoted to honoring and extending the influence of Murray, a civil rights pioneer, historian, and Episcopal priest.

Graebner and his wife, Chris, have one son, Martin.