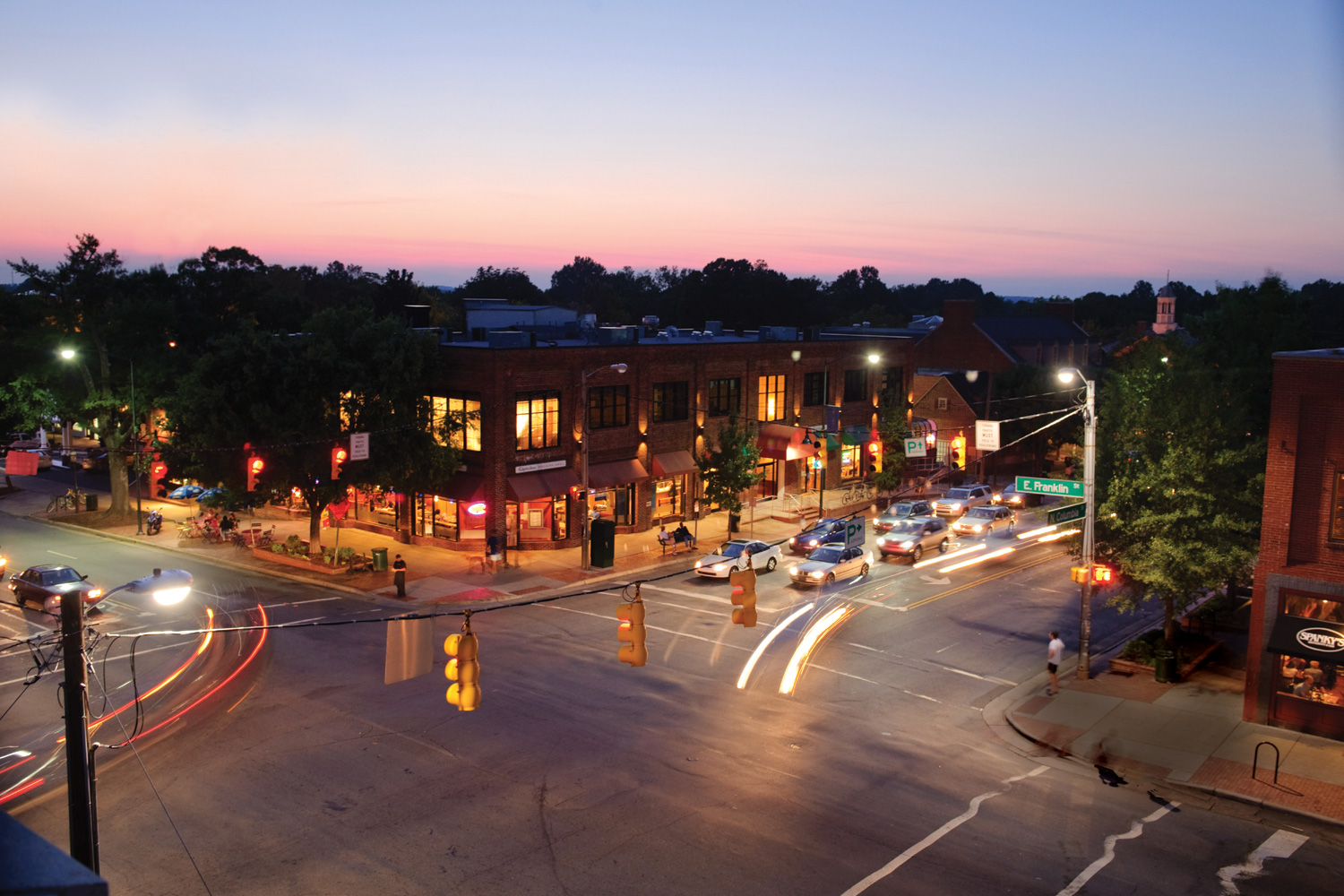 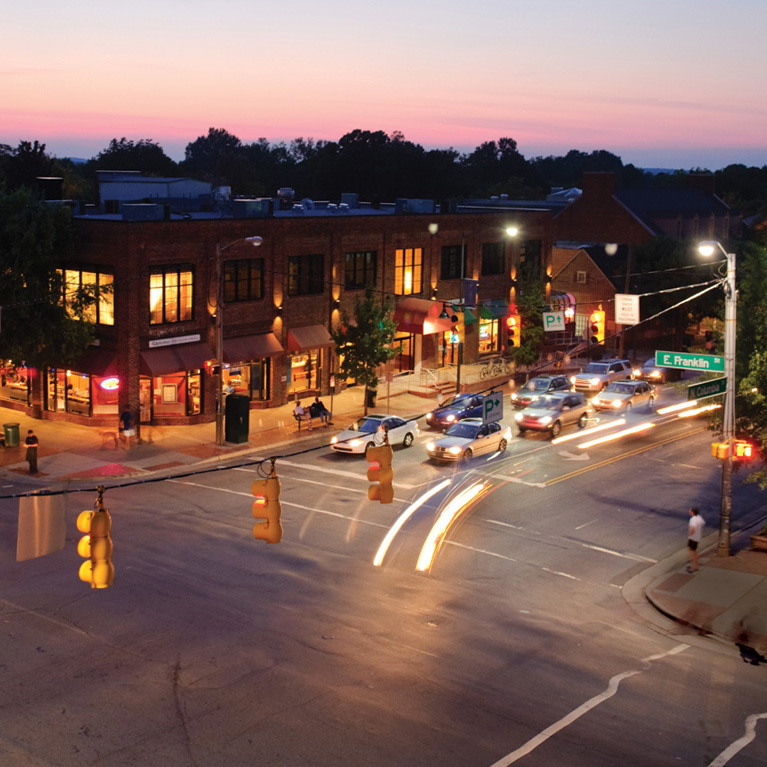 Update Required To play the media you will need to either update your browser or update your Flash plugin.
listen to Win Bassett read his prayer
scroll to explore 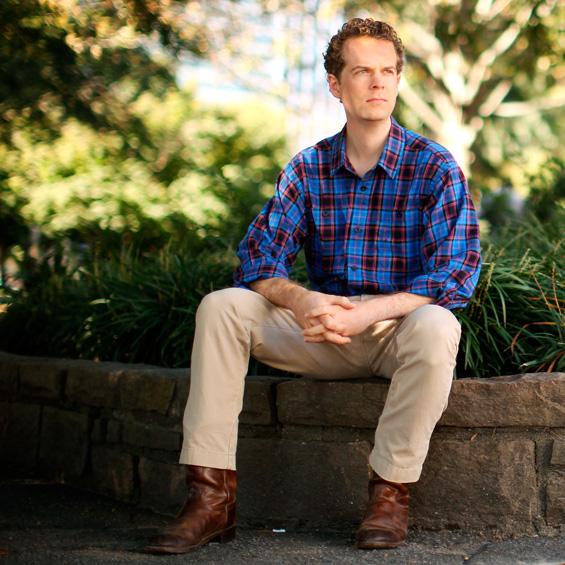 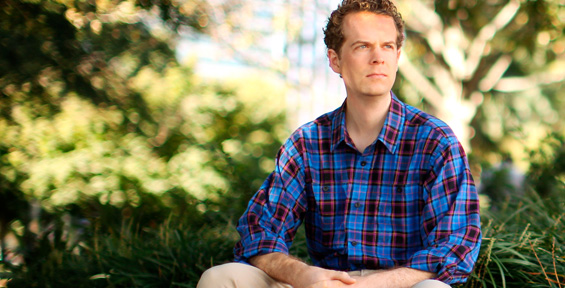 If it had been a Sunday, none of this would have happened. Walker Percy, who spent a few years as an undergraduate in Chapel Hill, once wrote, “Home may be where the heart is but it’s no place to spend Wednesday afternoon.” It was also no place for me to spend Saturday morning in my rhythm of balancing hunger and weekly exhaustion with nourishment and comfort. My substitution of epicurean craving for spiritual yearning, while on a college student’s budget, often yielded Chick-fil-A as my sanctuary prior to the Sabbath, a day when the chain famously isn’t open.

Like every Saturday before this one, I ordered healthy (in the Southern sense, implying a large quantity, and in this case, the opposite of the word’s intended meaning) portions of sweet tea and chicken biscuits for my girlfriend and me, and I turned the corner from the cash registers to find a booth. She, a budding poet and a young woman who possessed a modest and plain beauty so innate it still muddles me, followed a few minutes later, arriving at the table and cushioned seats with an even younger woman, perhaps more appropriately referred to as a girl. The girl was unknown to me, and known to my girlfriend only in the period between my procurement of Saturday’s sacraments and this moment.

The girl had asked my girlfriend for spare change to buy something to eat, and finding this occurrence incongruous with the part of town we were in, she didn’t give the girl money but instead asked something of her — her story. We learned that a kind soul had carried her to this waypoint, and the girl wondered where she should go next. She had no money, no food, and no belongings, except the baby growing inside her teenage, and now growling, belly. The stranger made me uncomfortable and suspicious from the moment she came to our table, and her story did nothing to quell my uneasiness. My girlfriend’s invitation for her to join us, to invade our sacred space and to occupy our sacred time, only amplified my agitation.

Of course, I didn’t resist. This was North Carolina, where we’re likely to love our neighbors in the privacy of our minds, but heaven forbid we venture into impoliteness by releasing our feelings — any of them — to anyone. But upon the girl’s first bite of the food I bought for her and her unborn child, while she sat across the table from my girlfriend and me doing the same, the uncomfortable became comfortable. A composed swell, one which I can’t recall emanating up or streaming down, wrapped my body and receded by riding my next exhalation. The wave reminded me of my mother rubbing my back as a boy, an active prayer for relief and serenity that flashed a stillness over my world.

The same quiet had hushed all differences among us at the booth during this unadorned act of eating in communion, of breaking bread in the form of buttered biscuits at a Chick-fil-A. At the first separation of a crumb from its foundation, a frosted window appeared between us to blur all dissimilarities into nonexistence; all three individuals became amorphous blobs. Our moments devouring cornstarch and flour and big cups of sweet tea together were, in the words of Thomas Merton, “wordless … beyond speech … beyond concept,” because for this brief and divine time, we were equal.

I’m not naïve enough to pretend that before the first bite and after the last swallow, equality still had a seat at the table. No two people (because the ideal requires more than one) in our vicinity could claim even a loose definition of equivalence with the girl — not me, not my girlfriend, not another customer, and not a restaurant employee. But to make myself feel better about the prejudice, bigotry, and racism that still shapes my thoughts and actions today, I like to think I made the needle of equality not quite budge but perhaps wish it could move that morning. I later carried the girl to her next waypoint, the Raleigh Rescue Mission, but I find this part of my story, of her story, isn’t as important as that which the story itself has become.

Years later and while counseling me about seminary, Dean Jack Boger at the law school in Chapel Hill imparted a lesson that connects my experience of breaking bread with the girl that morning to the decisions I make today. “In every thing you do,” he said, “you either make us more equal or make us less equal.” Unbeknownst to him, the aphorism resonates with the theology of fellow civil rights attorney William Stringfellow, who wrote more than four decades ago, “vocation means being a human being, now, and being neither more, nor less, than a human being now…. And, thus, each and every decision, whether it seems great or small, whether obviously or subtly a moral problem, becomes and is a vocational event, secreting, as it were, the very issue of existence.”

There is perhaps no purer way to secrete our existence, to be human beings, than to share our stories. “Everything translates to stories,” Hillsborough writer Lee Smith said in an interview. “[We] discover who we are, why we exist, what we should do.” Stories also let us know we’re not alone, and they often prompt us, like the bells that chime each hour in seminary, to stop and to meditate on why we’re doing what we’re doing.

I write mine in a relatively insignificant effort to “make us more equal” and to remind me of what I should do. I pray more North Carolinians share their stories about “being neither more, nor less, than a human being now” — now, more than ever before. 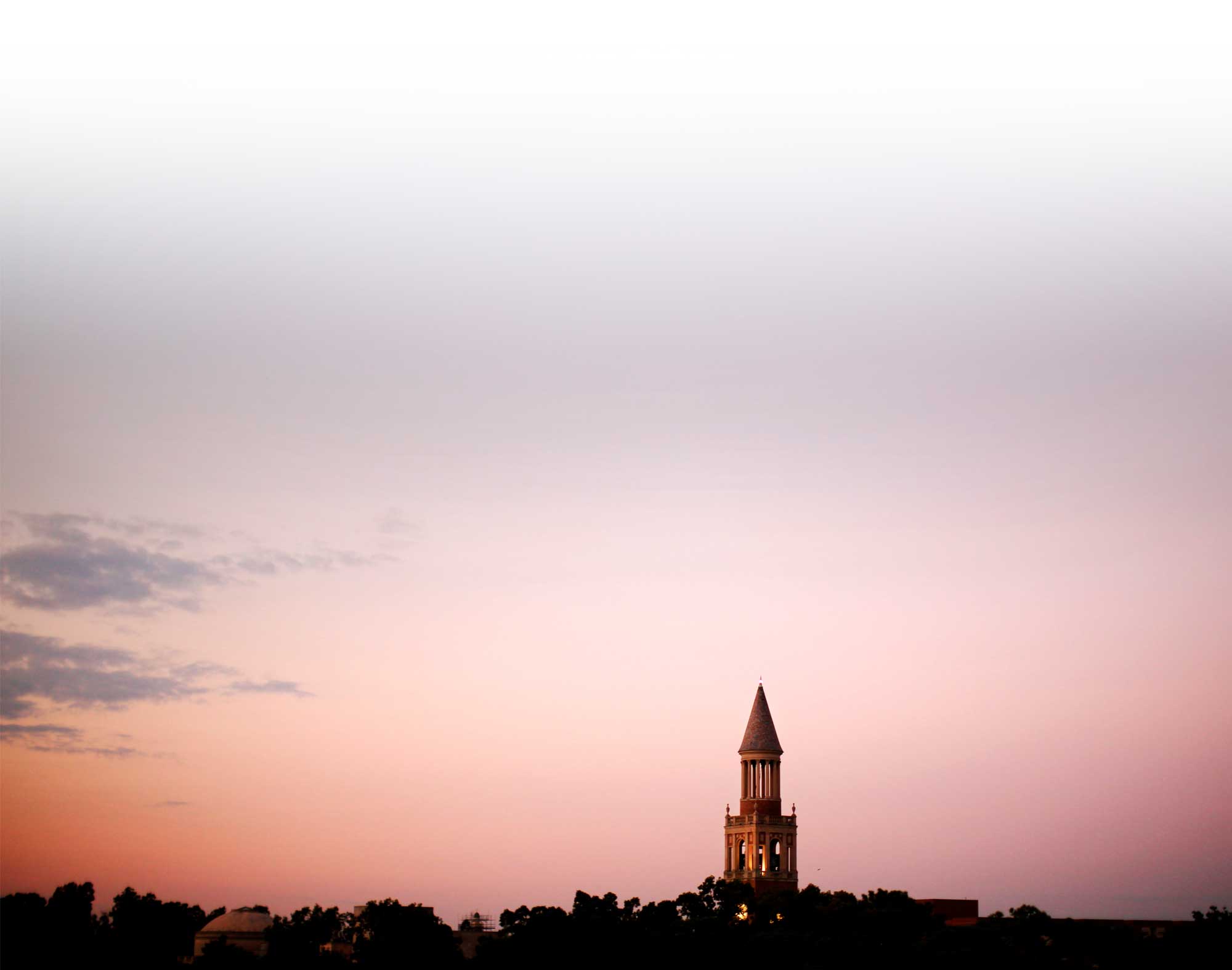 It’s hard to picture our state without this small town because Chapel Hill is such a part of North Carolina. 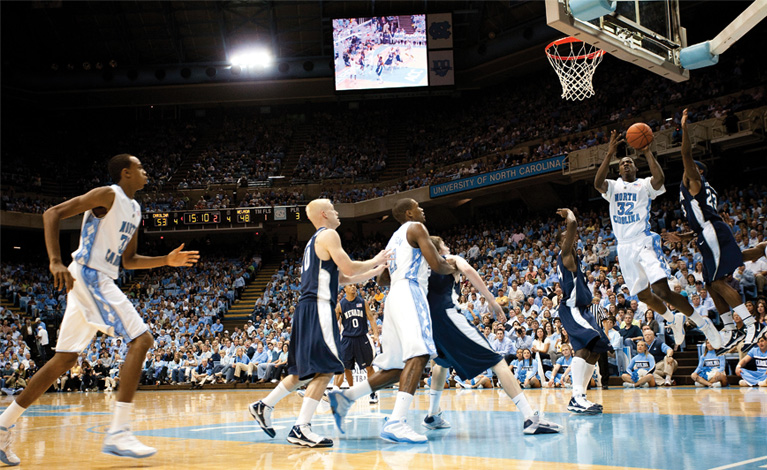 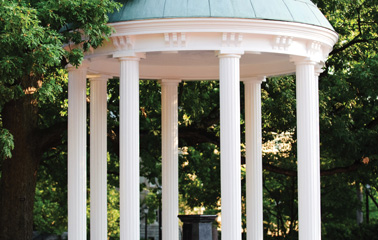 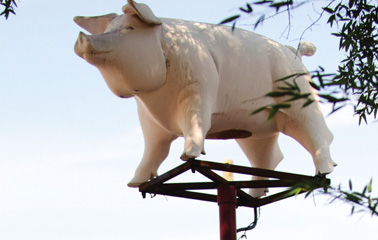 Crook's Corner, a longstanding Chapel Hill landmark, is famous for its shrimp and grits. Photo credit: Joey and Jessica Seawell

Let’s imagine for one moment that Chapel Hill doesn’t exist. Poof. Thousands of teenagers across the country are suddenly bareheaded, their Carolina ball caps gone. Poof. Throughout the land, the iPods of music critics erase their favorite songs. Poof. The rosters of NBA teams from coast to coast begin to hemorrhage skill as dozens of the world’s best players forget the lessons taught to them by men named Dean and Roy. Poof. North Carolina’s best students start to stream out of state. Poof. North Carolina is no longer North Carolina.

It’s hard to picture our state without this small town because Chapel Hill is such a part of North Carolina. Simultaneously cosmopolitan and provincial, it might make the news more than any other North Carolina city. The basketball team alone ensures this qualification for at least one month of the year. Or maybe it’s just that I notice its name more whenever I hear it now because the news is the only way I get to see Chapel Hill. Read Nic Brown’s full story about Chapel Hill.

For this brief and divine time, we were equal. 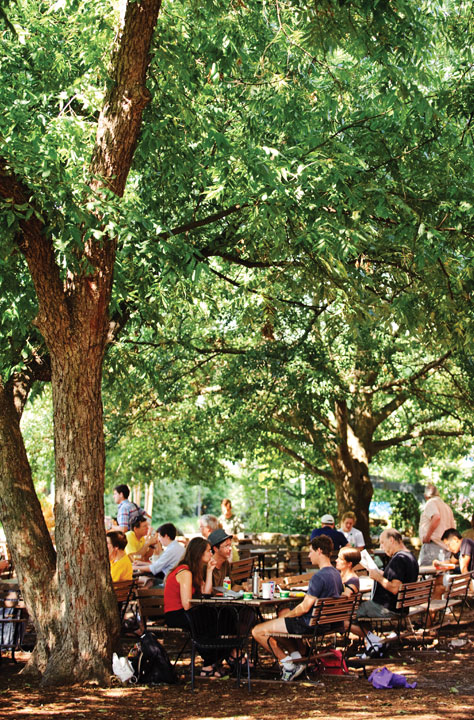 Weaver Street Market in Carrboro. Photo credit: Joey and Jessica Seawell
Listen to "Just a Closer Walk with Thee" by David Wimbish and Hayden Cook.
Update Required To play the media you will need to either update your browser or update your Flash plugin. 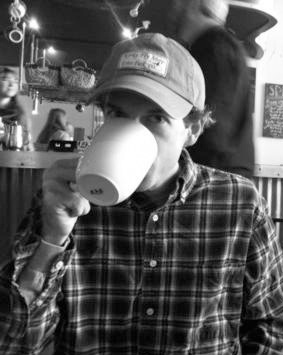 “In everything you do, you either make us more equal or make us less equal.” — Jack Boger

Win Bassett shares his suggested readings on equality and faith. 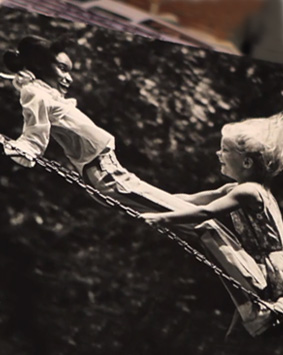 A graduate of N.C. State and the UNC School of Law, Win Bassett is a writer, lawyer, and most recently a student at Yale Divinity School. His writing, which often focuses on the intersection of faith, equality, and daily life, has appeared in The Huffington Post, The Atlantic, and a variety of other publications. Learn more about Win Bassett at his website.