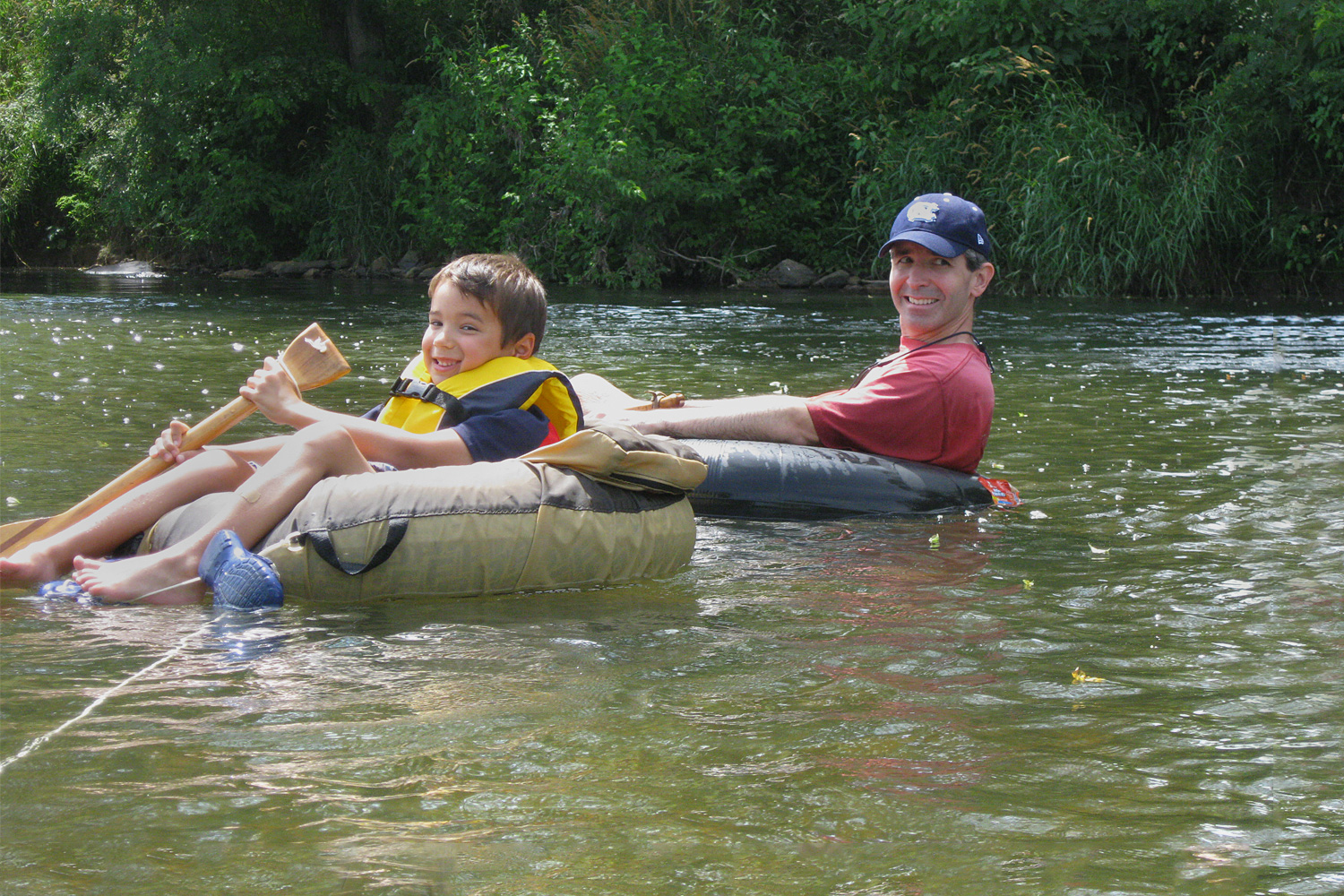 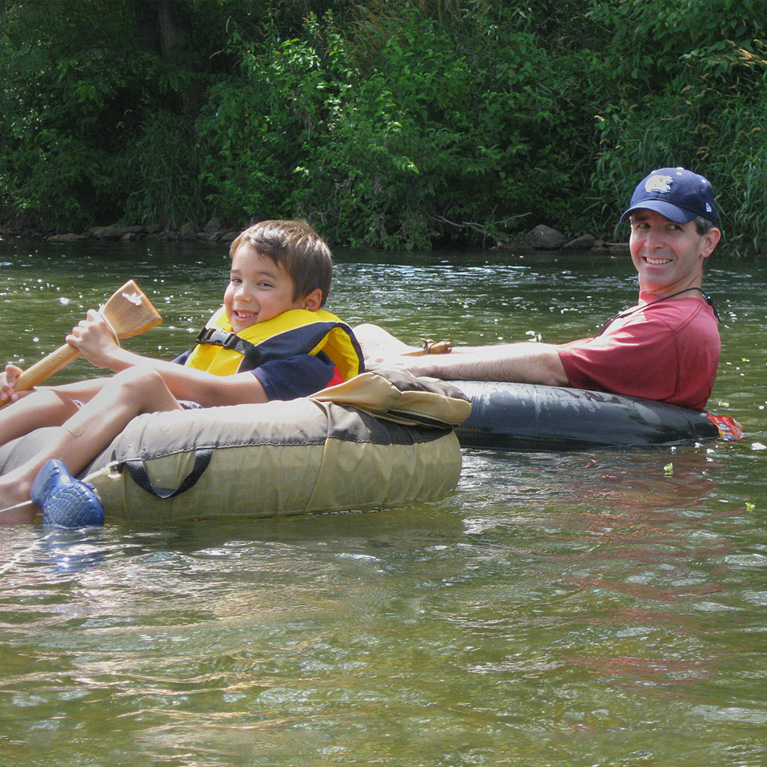 Update Required To play the media you will need to either update your browser or update your Flash plugin.
listen to Rick Bennett read his prayer
scroll to explore 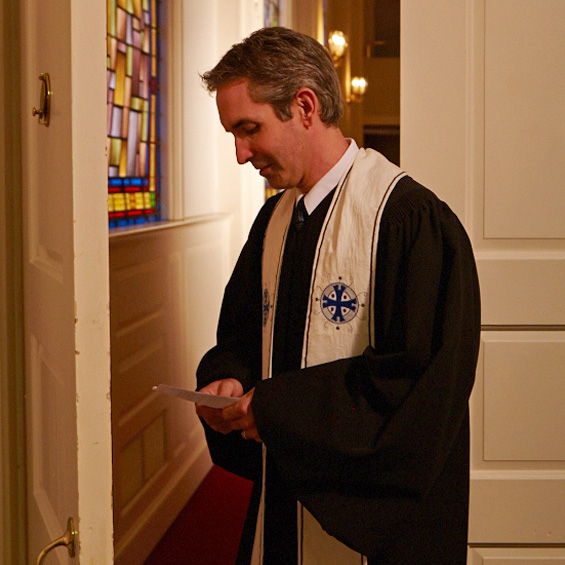 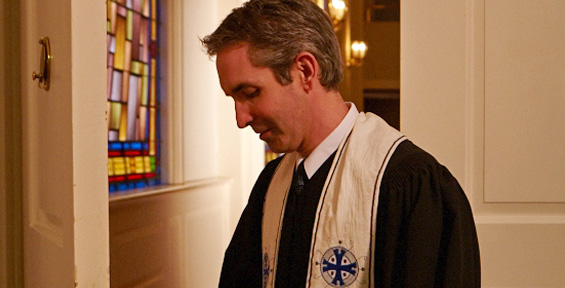 I was 10 years old when North Carolina became an indelible part of my identity. On a frigid winter’s night in ’82, my father and I came from the warmth of Florida to the Howard Johnson’s in Aberdeen so that I could meet my mother for the first time. The strong aroma of the pines held me captive in the car while my father reminisced with the night watchman at the Stanley Furniture plant in West End. The stories he told that night revealed to me who he’d been in a simpler time, and a drive by the hospital in Pinehurst began the telling of my own story. Since that night, I have always felt North Carolina’s embrace.

That embrace, revealed in my childhood, was confirmed in my adolescence. For the next several summers, I said tearful, late-evening goodbyes to my mother, brother, and sister at the Seaboard Station in Hamlet after playing in and around Ellerbe for a couple weeks. Six months after getting my driver’s license, I talked my father into letting me drive to North Carolina. By my senior year of high school, my impatience for the state’s embrace found me in a run-down sublet in Rockingham working third shift at Bi-Lo in anticipation of attending Campbell University in the fall — four years that changed my life. Balmy days doing youth ministry and trips to the Blue Ridge Parkway with my “Meredith Angel” confirmed my “call” to a life of family. After seminary in Richmond, we began making that life in Fuquay-
Varina, our own little Tar Heel on the way. Before long, I was called to a church in the other Carolina. The next Tar Heel was born, this time in Gamecock territory. A calling several years later to the denominational office in Atlanta was made tolerable for nine years by frequent trips to speak and teach in North Carolina churches, sometimes picking up Mama for the ride, as well as the latest issue of Our State (which I devoured upon taking it out of the mailbox).

For a time, I felt silly about the idea that God was calling me home to North Carolina (as opposed to China or some other, more exotic and dangerous place). But a bit of empathy from an older, wiser friend reminded me that life was short and my sense of calling not so far-fetched; my love for North Carolina was rivaled by his longing for Texas (a yearning I cannot understand). That conversation helped make sense of my restlessness and gave me the courage to pursue a new chapter, one with an old connection.

One night when I was 12, a truck driver came through a then-remote Floridian beer-and-bait outpost that my father managed. When he found out that we were North Carolinians, he gave us a couple black-and-yellow hats reading “Rumple Furniture Company, Elkin, N.C.” Neither of us had heard of Elkin. I loved that hat. It was for me one more facet of North Carolina’s embrace. I wore it for years until a girlfriend threw it out the window during a heated exchange. I watched in horror as it rolled down the interstate in the rearview mirror. Much more recently, a friend visiting Atlanta stopped in to ask if I’d be willing to submit my résumé for pastor at First Baptist Church in Elkin. In July of 2012, the church voted to call me as their pastor. Stranger still, my family lived for a time in a home belonging to the Rumples. After hearing this story, someone recently noted, “You got your hat back.”

Surely God transcends political boundaries, but is there a more likely geography than ours where the Kingdom of Heaven might take root? These are my thoughts as I drift “up” the New River on an October morning, family in tow, leaves turning. We stop to eat our lunch from the Todd General Store by an old gristmill. My boys are splashing and laughing. I’m pensive, thinking about my ancestor Cyrus, my boys, and the future of North Carolina. They struggle to understand why I stop to pick up a piece of submerged litter. I explain, “When the river is your sanctuary, picking up litter becomes an act of worship.”

Thank God for the embrace of the Old North State. When I have had to leave her, I have done so with the greatest hesitance, and only to pursue the call that transcends geography. Even amid those calls, my heart has yearned for her, hoping like Moses that I would one day find rest in The Goodliest Land, fearful that God may have only given me a glimpse of it. To this day, I relish driving into North Carolina on a country road as the sun sets on the passing fields. As a gesture of thanksgiving, I quietly salute her flag on the passing sign and then press my hand to my heart as she welcomes me home. Silly, I know. 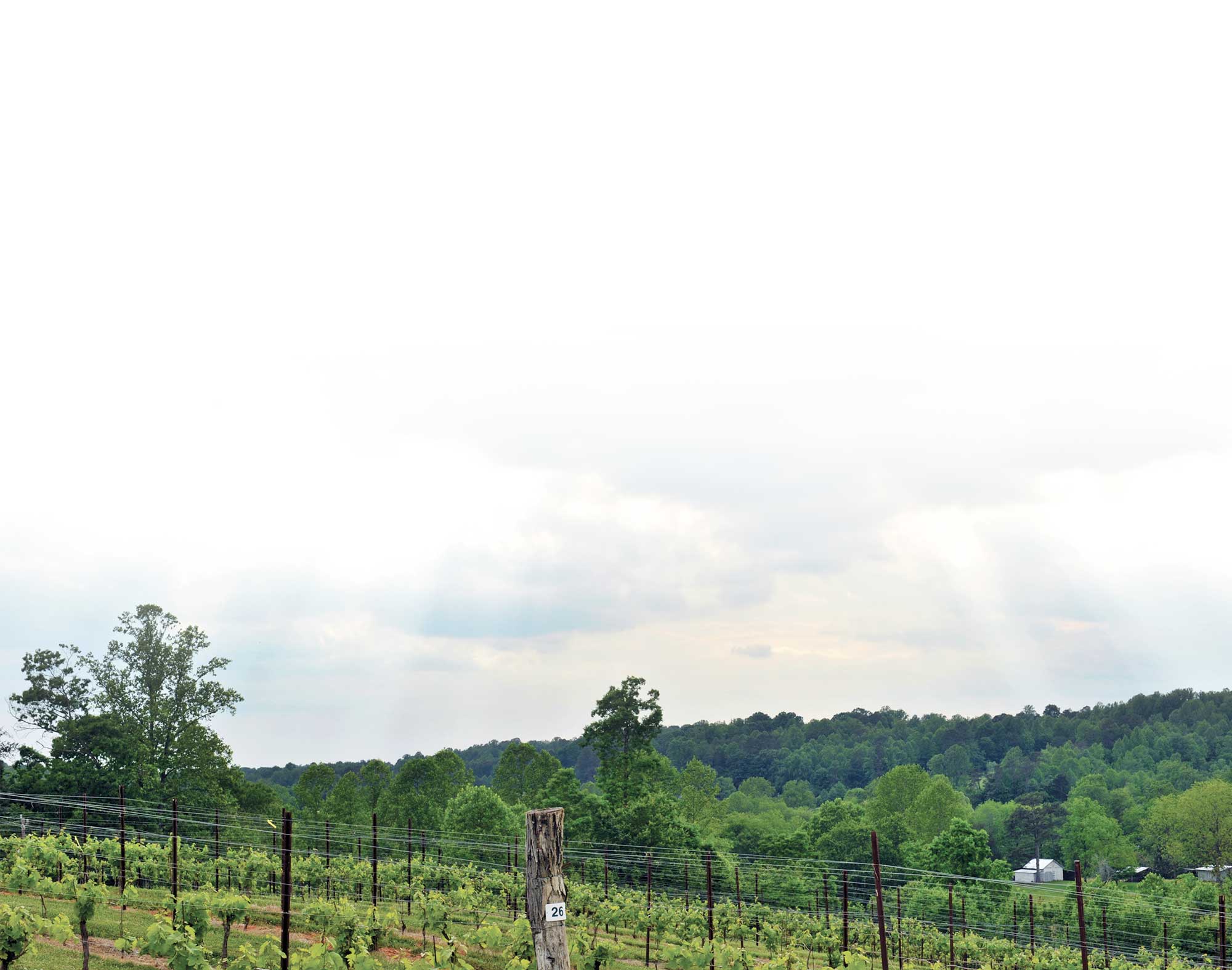 Thank God for the embrace of the Old North State. When I have had to leave her, I have done so with the greatest hesitance, and only to pursue the call that transcends geography. 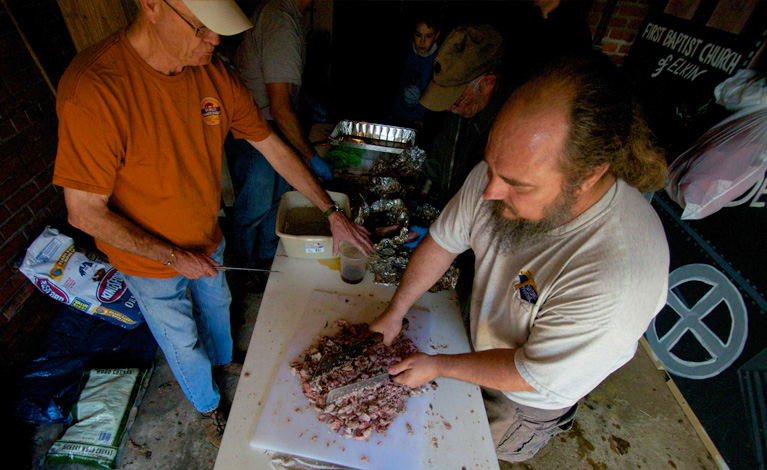 Members of the congregation gather to prepare barbecue for a church fund-raiser. Photo credit: David Cassady 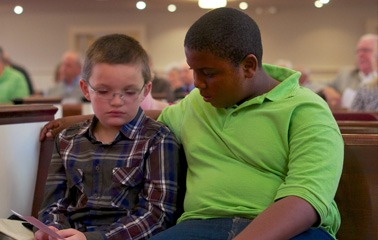 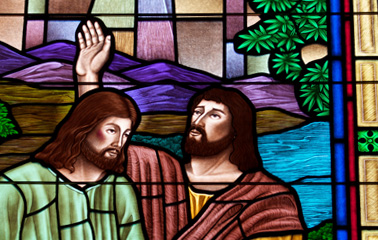 Sanctuary window at First Baptist Church. Photo credit: David Cassady
“Gather at the River” by Aaron Burdett
Update Required To play the media you will need to either update your browser or update your Flash plugin.

After spending time first on an unpaved road and then on another across from the post office, First Baptist Church of Elkin found its home in 1955 on a hill overlooking the town it serves. Learn more about the church at their website.

In the heart of the Yadkin Valley, a little, old town ages into a dynamic place that stands on the edge of miraculous. 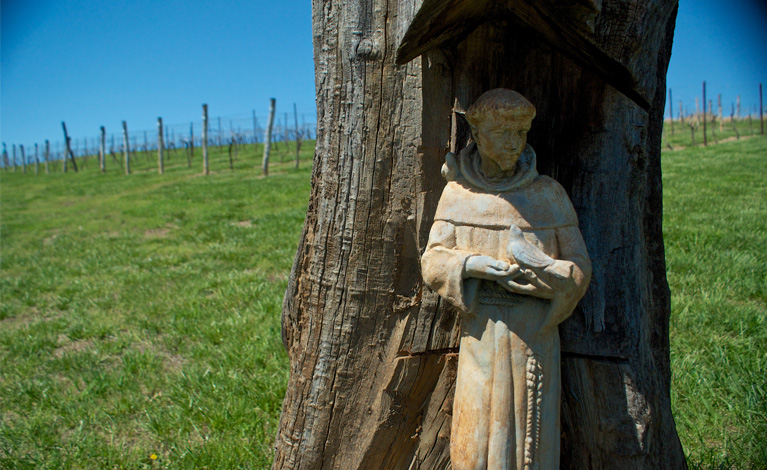 A statue of St. Francis of Assisi watches over the vineyard at Elkin Creek Winery. Photo credit: Rebecca Eller Bennett 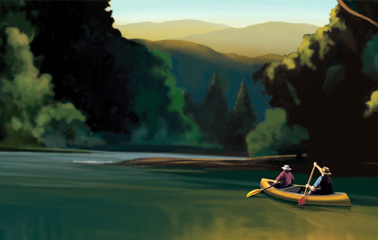 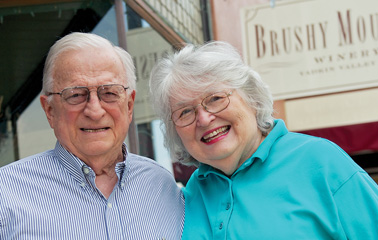 Like many small downtowns, Elkin experienced an exodus in recent decades. But here, the space left behind has become an artist’s canvas. No, scratch that. Ball is uncomfortable with the title of artist. She’s not classically trained. Her public art project, Aesthetic Installations, is her interpretation of community service. Ball — a stylish woman with a penchant for scarves — calls herself a “creative domesticator.” She takes neglected public spaces and makes them feel intimate again.

To this day, I relish driving into North Carolina on a country road as the sun sets along the passing fields. 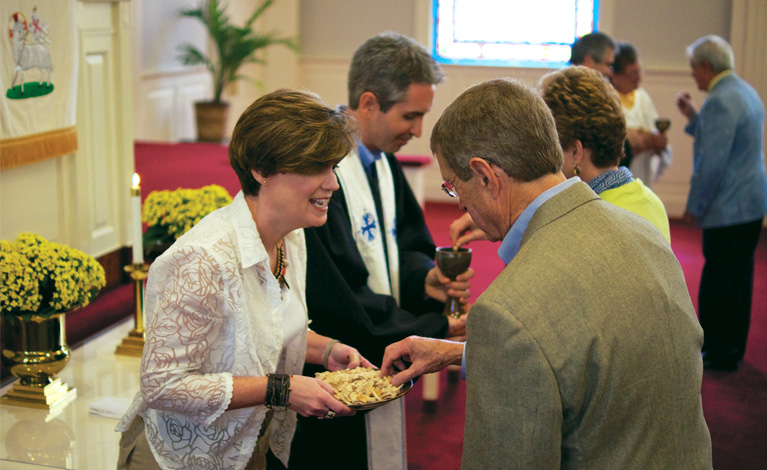 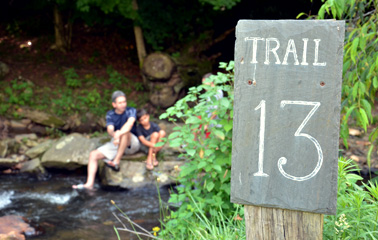 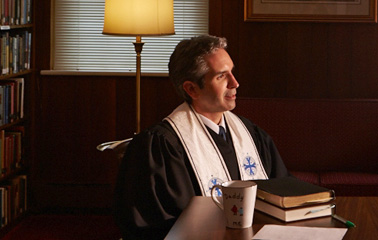 Prior to arriving in Elkin, Bennett served in various capacities at churches in Summerfield, Raleigh, Apex, and in Virginia and South Carolina. Most recently, he served as a denominational director at the Cooperative Baptist Fellowship in Atlanta.

Bennett recharges by traveling, kayaking the New River, and spending time with his wife, Rebecca, and two boys, Tyler and Ethan.