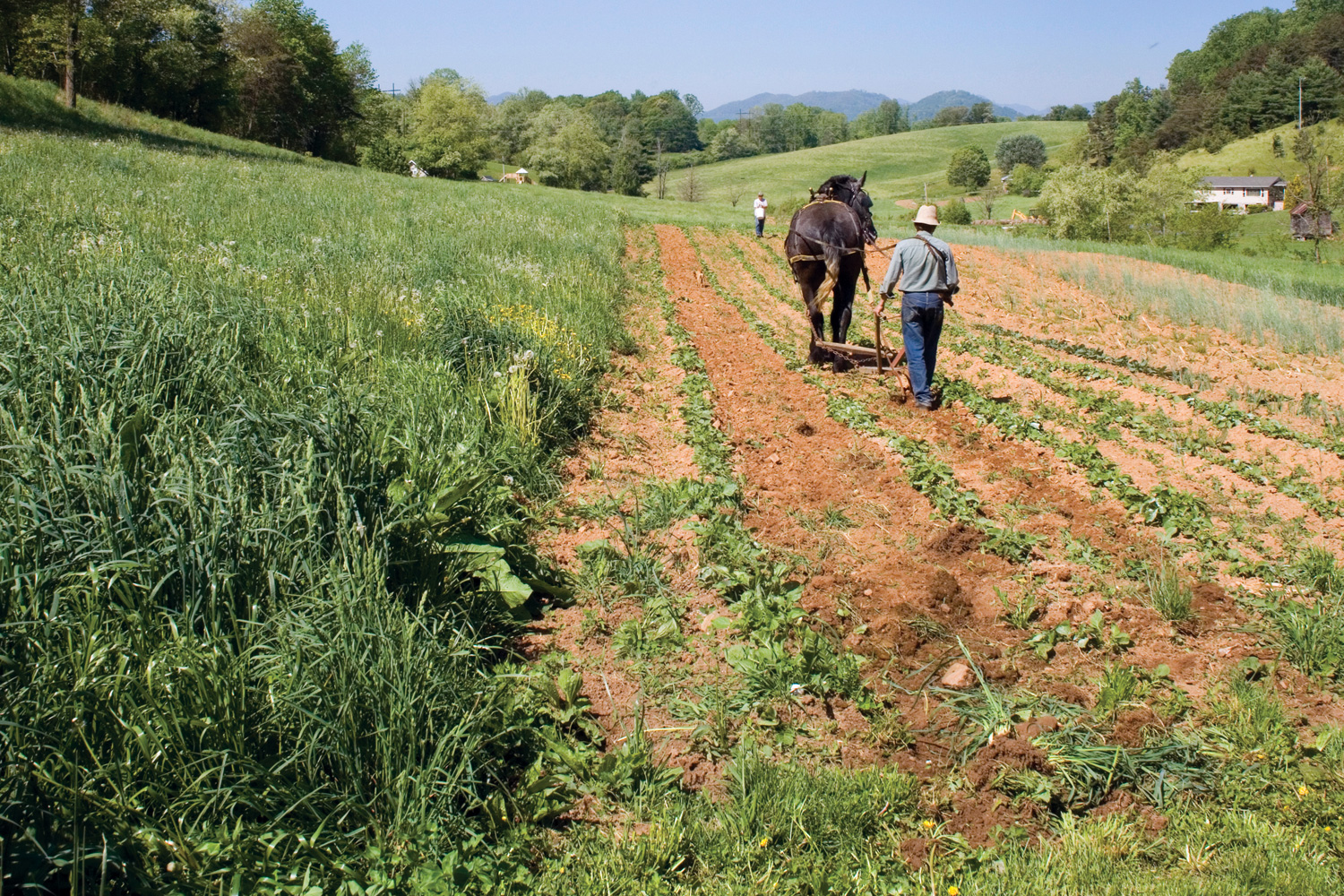 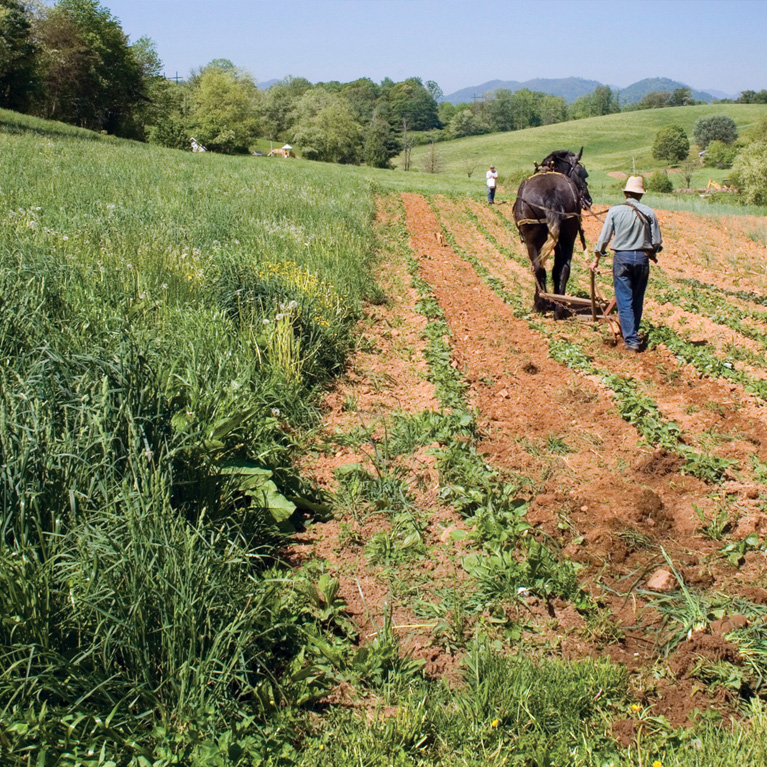 Update Required To play the media you will need to either update your browser or update your Flash plugin.
listen to Fred Bahnson read his prayer
scroll to explore 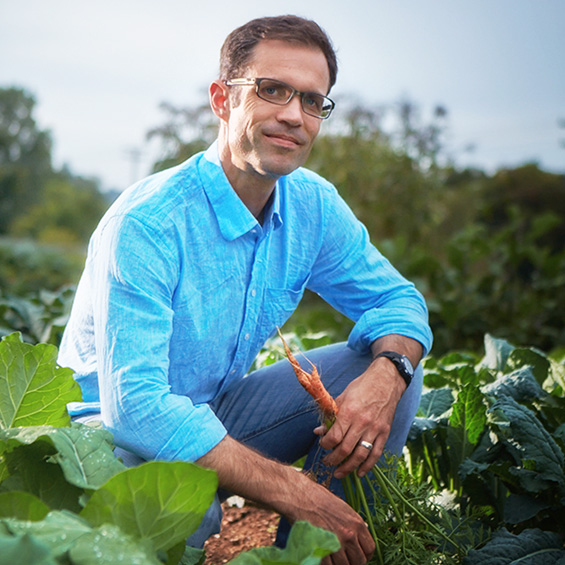 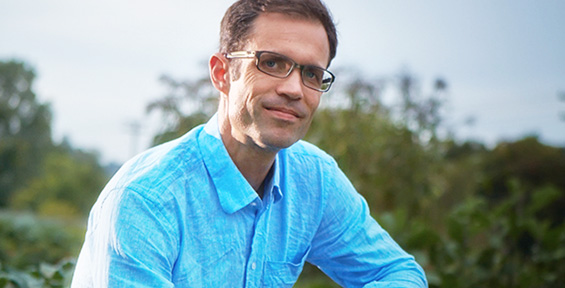 Here, a prayer I might pray 40 years from now…

Oh, Lord, listen. I am old, my voice hoarse, and our time here is short. It’s Christmas Eve. Before I go, I wish to speak my mind before You and those gathered here.

But first, a story: It’s Christmas Eve in Old Salem, 1978. A boy of 5 walks into Home Moravian Church, where he is about to experience his first Lovefeast. He sits with his family in the pew; they sing “Morning Star,” and soon a group of women wearing little doilies on their heads carry in trays of white coffee mugs. The mugs are passed down the pew, and when the boy’s mug finally comes he takes his first sip of the sweet, weak coffee. It will keep him awake for hours, but that doesn’t matter; it’s Christmas Eve, and here come the buns. The boy watches his grandfather put his bun on top of his coffee mug, steam warming its doughy underbelly, and he does the same.

The boy’s family settled long ago in this town of Salem. His great-great-great-grandfather was the bishop of Home Moravian during the Civil War. At the turn of the 19th century, the bishop’s son appeared in National Geographic, his children sitting on giant lily pads growing in their pond on Church Street. But most alive in the boy’s imagination just now is the grandfather who sits quietly beside him, the same gentle man who on Halloween night of 1930 tried to blow up the “Old Moravian Coffee Pot.”

The sculpture stood on the north end of Salem, a 12-foot-high replica of the pots the doily ladies were now using to fill up their white mugs. When the grandfather and his friends dropped a lit bomb down the spout, it failed to destroy the sculpture, only ripping a hole down the seam. Because in making the bomb the grandfather had shellacked together dozens of pieces of his mother’s stationery, the police only had to pick up any piece of confetti littering the scene the next morning to discover a name, an address, and a 16-year-old boy newly amazed at his own power for destruction.

The boy takes his first bite of bread. It’s sweet and moist and has a strange flavor. “Mace,” his grandfather says. The boy is secretly thrilled that he gets to eat and drink real food in church. Yellow beeswax candles with red crepe paper are handed down the pew. The room goes dark. A lone candle is lit, then another, and another, until the light reaches the boy. His lit candle is one of hundreds, and as he holds up his light and munches his bread and sips the sweet, weak coffee, he feels there is no place else he would rather be than here.

The memory of this meal — its peace, its fullness, the knowledge of God’s presence — will follow the boy for the rest of his life. When the boy becomes a man, he will attend a North Carolina seminary, but instead of becoming a preacher he will travel to Mexico to work with Mayan coffee farmers, sharing simple meals of tortillas and sweet, weak coffee. While there he will discern a call from You, perhaps the clearest call you have given him to that point in his life. A call to feed people. The boy-man will go to Chatham County to a small permaculture farm, where he will begin to learn the agrarian arts. He will meet his bride, and together they will help a church start a communal food garden for the hungry — an acre of vegetables and fruit in northern Orange County — and for the next four years the man will lean fully into his calling to feed people.

Such are this old man’s memories. Which brings us to this Christmas Eve. I’ve been thinking about how this faith business you’ve given us really isn’t about doctrine or dogma or even belief. It’s about this hunger we have, and how we fill it.

Hunger is faith’s engine. It’s the driver of all our doings, and it either leads us to Your table of mercy and abundance, or it leads us to fill ourselves with food that does not satisfy. Sometimes I wonder why You gave it to us, this insatiable craving.

“Our hearts are restless until they find rest in Thee,” wrote St. Augustine. But rest implies stasis, stagnation, boredom. God save us from rest. No, our hearts are hungry until they feast on Thee.

Lord, even here in this place we call North Carolina, we still have yet to embody your Beloved Community, where all can sit as equals at the same table. We live in a time of love and destruction, of agape feasts and exploding monuments, of hunger and plenty. May this feast of Your body and blood make us more like You — merciful, kind, open-handed. And if we find the coffee pot of tradition becoming a burden instead of a blessing? Then, Lord, give us the courage to light the fuse of your explosive love, drop it down the spout, and blow the hell out of it. 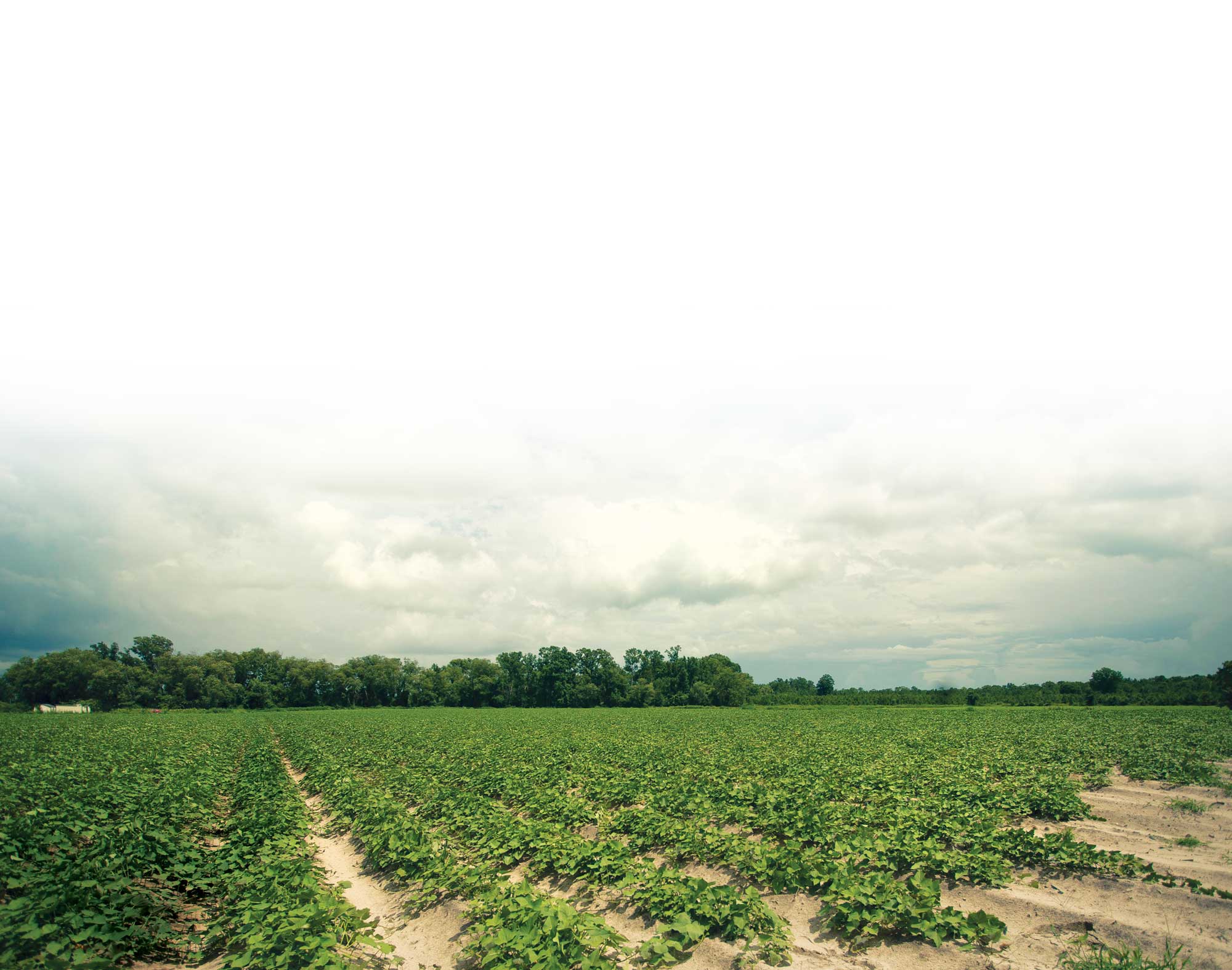 The memory of this meal — its peace, its fullness, the knowledge of God’s presence — will follow the boy for the rest of his life. 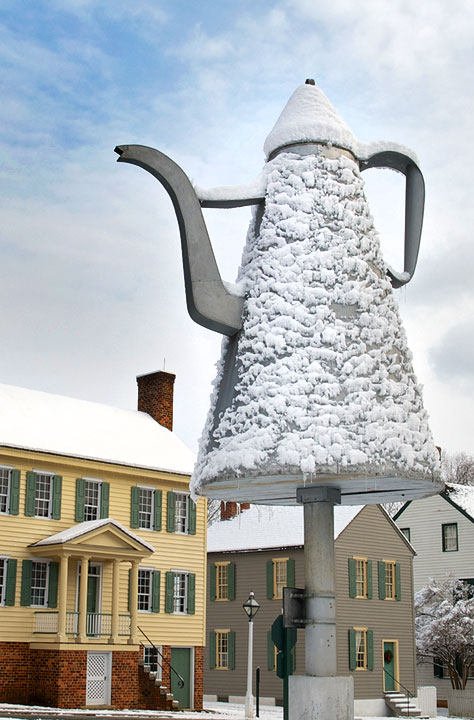 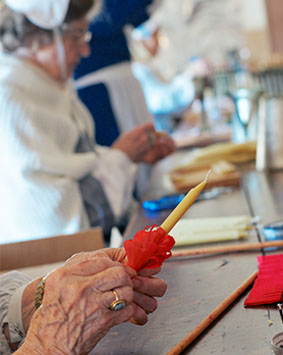 The red paper base of the beeswax candles represents Christ’s blood at death. Photo credit: J. Sinclair
"Morning Star" from Rejoice, Rejoice, Believers – Moravian Advent and Christmas. Produced by the Moravian Music Foundation.
Update Required To play the media you will need to either update your browser or update your Flash plugin. 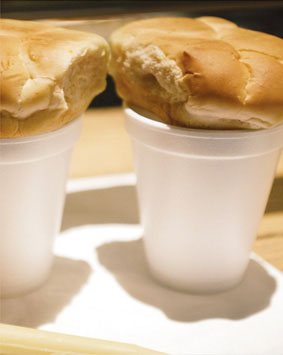 Coffee, a mild cafe au lait, served with a sweet raised bun — the table is prepared or the Lovefeast.

Find a recipe and a story about this tradition just for you.

About the Wake Forest School of Divinity

The Wake Forest University School of Divinity shares a common roof with the campus’s soul-center, Wait Chapel. Each December, Wake Forest and the greater Winston-Salem community gather inside the chapel to partake in a Moravian Lovefeast. It is a treasured reminder of the peace that Bahnson and his students hope to preserve through their food-religion movement — a rekindling of humanity’s relationship with God through the spiritual significance of a shared meal. Read more about the Food, Faith, and Religious Leadership Initiative at Wake Forest School of Divinity.

Hunger is faith’s engine. It’s the driver of all our doings.

The community gardens at Bethabara Park in Winston-Salem, the site of the first Moravian settlement in N.C. Photo credit: Joey & Jessica Seawell.
Play video
Hear Fred Bahnson talk about the power of food in community. 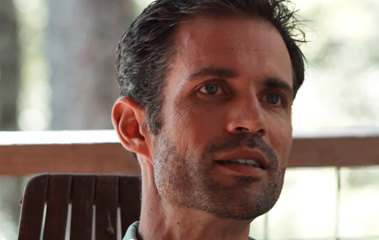 Play video
Hear Fred Bahnson speak about the garden as a metaphor in our lives. 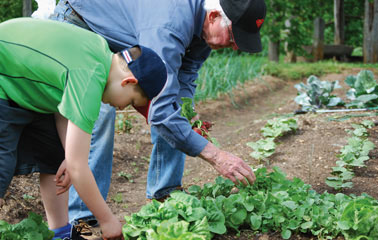 Working in the community garden at Bethabara Park in Winston-Salem. Photo credit: Laurie Weaver
Play video
In recalling one of his favorite meals, Fred Bahnson explains food as an expression of love.

An old man and a young boy go to the garden. With every visit, their routine is the same. They walk to the gate, and the man reaches into his pocket and pulls out a tiny key. He hands it to the boy. It’s the boy’s job to unlock the gate. He likes that responsibility. It feels important.

The man has been coming to this community garden at Historic Bethabara Park for 16 seasons. The boy joined him just two years ago. The boy likes to plant things. He likes to eat the lettuce, potatoes, and yes, even the lima beans that he’s watching grow.

The man likes to believe that, beyond those lima beans and potatoes, something else just might be happening. Those little plants might also grow into a love of nature and good food and a 21st-century life that’s a little more connected to the soil and the sun and the seasons than it might have been otherwise. Read the full story about the Bethabara community garden.

We live in a time of love and destruction, of agape feasts and exploding monuments, of hunger and plenty. 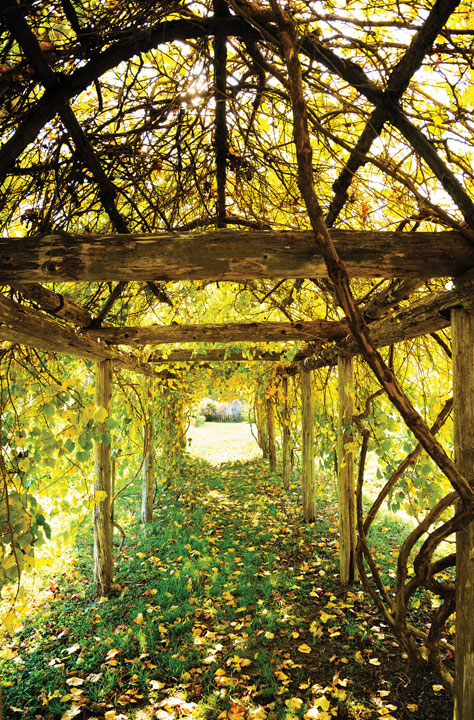 Muscadine and scuppernong grapevines cover an arbor in the center of the garden at Bethabara in Winston-Salem. Photo credit: Joey & Jessica Seawell.
"Plow the Fields and Scatter" by Tyler Nail
Update Required To play the media you will need to either update your browser or update your Flash plugin. 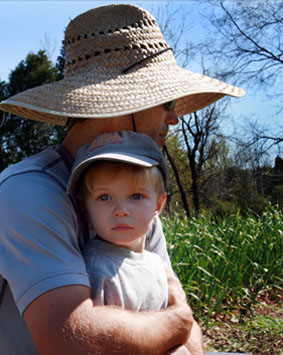 Fred Bahnson with his son Carsten in a garlic field in 2005. Photo credit: Fred Bahnson 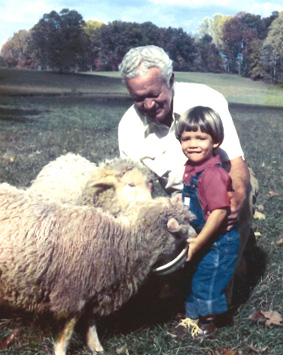 Fred Bahnson is director of the Food, Faith, and Religious Leadership Initiative at Wake Forest University School of Divinity. Bahnson is the author of Soil and Sacrament: A Spiritual Memoir of Food and Faith. His writings about the intersection of food, spirituality, and agriculture have appeared in a number of magazines and literary anthologies.

Though his family’s roots are deeply planted in North Carolina, Bahnson grew up in Montana and spent three years in Nigeria, West Africa, with his missionary family. He holds a master’s degree in theological studies from Duke Divinity School and served as a peaceworker among Mayan coffee farmers in Chiapas, Mexico.

Today, he lives with his wife, Elizabeth, and their three sons in Brevard. They have a half-acre permaculture garden where they grow their own fruit and vegetables. Learn more about Fred Bahnson on his website.